Summary of the "Philosophy, the refugee crisis, and how to help in Hungary" panel 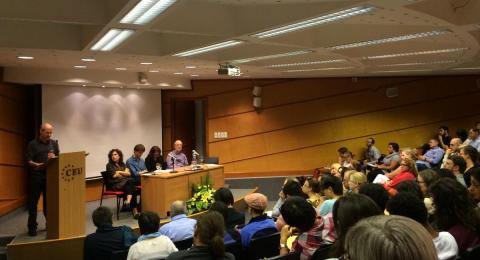 There was a very large turnout on 22 September for the public panel event led by CEU philosophy professors, "Philosophy, the refugee crisis, and how to help in Hungary" -- indicating the keen interest across CEU in helping refugees and migrants, as well as in philosophical analysis of political debates about migration policy.

Philosophy Department head Hanoch Ben-Yami chaired, beginning with strong statement about the seriousness of the situation and why it called for such an event. Against Prime Minister Viktor Orban's claim that the refugee crisis has led to an "identity crisis" of liberalism and opened the way towards the rise of Christian political thought in Europe, Ben-Yami argued that the claim of the crisis of liberalism is false, and that Orban's policies or rhetoric have nothing to do with Christian morality, political or other.

Katalin Farkas informed the audience about some of the activities of the CEU community in organizing aid for refugees and the sudden change in circumstances in the last few days, due to the completion of Hungary's border fends with Serbia. Her main message for those wishing to help practically: there are few refugees in Budapest right now, but stay tuned!

Political philosophers Zoltan Miklosi and Janos Kis set to work to refute Prime Minister Viktor Orban's anti-liberal and anti-immigrant arguments. Miklosi also rejected the alleged "identity crisis" of liberalism, which he located in a supposed conflict between the rights of individuals to escape persecution and the territorial rights of states. He argued that the territorial rights of states are grounded in individual rights to live autonomously, which require the possibility of establishing residence. But this cannot give states the right to dictate the composition of residents within their borders by excluding refugees, particularly when the latter would be unable to live autonomously themselves due to the persecution or failings of their own governments.

Kis examined and dissected three of Orban's claims, including the claim that EU governments should simply send funds to Syria's neighbours to help refugees and tell refugees "don't come"; the claim that the refugee crisis is a German problem rather than a European one; and the claim that there is a clear cut distinction between refugees and economic migrants. Orban's policy proposal, Kis said, is not just physically unfeasible, but also morally outrageous. Our duties to migrants, he argued, stem from justice, which sets the bar much higher than charity. Justice requires the community of states to respond. And moreover, refugees have a legally recognized moral claim to acceptance based on persecution. The reason why persecution grounds this claim is because of the threat it poses to existence and livelihood. But many economic migrants face similar threats, and therefore have just as strong a moral claim to acceptance as refugees do.

Ethicist Simon Rippon analyzed the ways in which propaganda has influenced the public debate. Rippon explained why propaganda threatens democracy, and outlined devices of propaganda in the Hungarian Government's sham "National Consultation on Immigration and Terrorism" and anti-immigrant billboard campaign. He explained how propaganda can consist in the words with which a debate is framed, or things left unsaid, such as the failure of the media and leaders to discuss and debate how EU policy forces refugees away from airlines and into the unsafe hands of people-smugglers. And he raised the question whether there can be such a thing as good propaganda.

Finally, philosopher of science Maria Kronfeldner described how we dehumanize refugees. Using the philosophical and scientific literature on dehumanization, Kronfeldner noted the important roles that volunteers, protesters, rational reflection and research on implicit attitudes play in not only helping but humanizing refugees. She argued that since anthropology, history and cognitive science have accumulated plenty of readily available knowledge about implicit attitudes, those who could know about their own implicit attitudes have a duty to know about them in order to be able to minimize them.

The Department's work on these issues is set to continue, including hosting an international conference on dehumanization in April 2016.
Category:
News